The Sun and Other Stars, by Brigid Pasulka 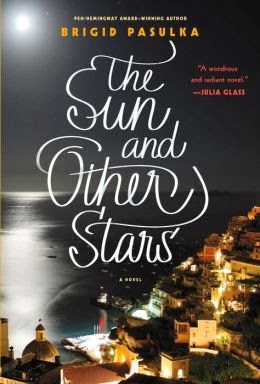 Without even knowing it when I accepted it, I realized within a few chapters of Brigid Pasulka's The Sun and Other Stars that this was the book I'd been waiting to read for a long time. A coming-of-age story set in Italy, mixed with the peculiarities and blessings of a small town, I was swept away with its love and grief. What a lovely story.

Etto, the butcher's son in a tiny seaside resort town on the Italian Riviera, is lost. Suffering the recent deaths of both his twin brother and his mother, Etto and his father find themselves slowly growing further apart. Cynical and doubtful of supposed good intentions, Etto distances himself even further from his friends and the residents of their small town, who always think they know what's best. It's only when his father's favorite soccer player, Ukrainian Yuri Fil, seeks sanctuary in San Benedetto to hide from a scandal, that Etto realizes there just may be hope for each of them, no matter how much of an outsider they might be.

There are few things that make me jump at the chance of reading a book offered by a publisher, but the story's setting in Italy is a sure thing for me. When the publicist kindly reached out, I did jump at the chance, even though I've been steadily declining most book offers over the past year. Returning back to work from maternity leave was of course another distraction, but Brigid Pasulka's The Sun and Other Stars seemed like the perfect story to settle in with. And it was. It was worth every single moment.

Written casually yet beautifully, Etto speaks directly to the reader and allows his negativity to take center stage at the beginning, showcasing quite the chip on his shoulder. Like most complex characters, however, the peeling of the onion delivers more layers, and it's clear Etto is not only heart-breakingly devastated by the loss of his brother and mother, but sweet and sensitive as he allows himself to fall in love with Yuri Fil's younger sister.

Most successful stories are able to create a character out of the town itself, and Pasulka does just that with the quirkiness of San Benedetto. Every character, from the nonne (grandmothers) who gather outside of church on Sundays to share in local gossip, to Martina, the owner of the bar everyone goes to in order to watch soccer and cheer for victories or argue and lambast for defeats, provides such substance and support to Etto's overall growth, rebuilding his lost faith and his connection to them. While a tiny village can sometimes either be a curse or a blessing, most times it's the only place to heal. The journeys Yuri, Etto, and his father each need to take to realize how much they do fit, that recovery is possible, is a reminder that perhaps a small town isn't such a bad thing after all.

This is one to remember. I highly recommend this, and I urge you to check it out. I loved everything about it, with Italian thrown into the dialogue and description, I felt like I was right back in Rome five years ago on my honeymoon. Ahh. To move there one day is the goal.

Anyway, you won't regret reading this one. You'll learn how soccer is like a religion, that love can heal, and that small towns and big families of friends and neighbors will always give you the strength you need.


I sit through the next round, watching them, and I feel a little like Nonna must feel, like I've got my face pressed to the glass looking in on everybody else. (p.158)

The beaches are empty this early in the morning, the sea so flat, I could fold it up into an envelope. (p.159)

That's another thing they forget to tell you about grief, that every loss you feel after the first is not added but multiplied, like what they tell you in school about drinking and taking drugs at the same time. And after squaring so many fraction and fractions of fractions, you find out you've used up your lifetime allotment of both pain and joy, and all that's left is an emotional flatline and the deep conviction that you will never, ever try anything with the potential to intoxicate you again. (p.295)

FTC Disclosure: I accepted this book from the publisher in exchange for an honest review. If you can't tell from the above, I loved this book. 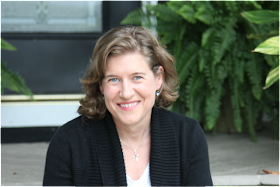 Brigid was born and raised in rural Illinois and has lived in Poland, Russia, Germany and Italy. Her debut novel, A Long, Long Time Ago and Essentially True won the 2010 Hemingway Foundation/PEN Award and was a Barnes & Noble Discover Great New Writers selection. Her second novel, The Sun and Other Stars, was an Indie Next pick for February 2014. Brigid lives in Chicago with her husband and son and runs the writing center at a public high school.

Visit her:
Natalie~Coffee and a Book Chick at 11:38 AM
Share